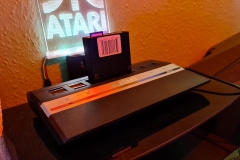 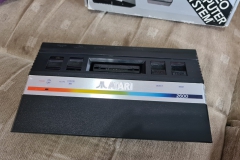 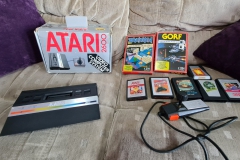 The Atari 2600 was launched back in 1977 and was really the start of video gaming as we know it today.

The version in my collection however is the later released model, the Atari 2600 Jr from 1986. I got this from Facebook marketplace from someone I went to school with. She had had it since a child and had kept the console in great condition. To my surprise it even had the plastic protective layer over the metal strip. How on earth she went all this time without peeling that off is beyond me :). I keep getting tempted to peel it off now but so far have resisted the temptation.

For some reason, this Atari seems to have the Atari 7800 controller with it. Not sure what the story is behind that. But I have now purchased two replica 2600 controllers from Amazon so I can battle it out with some 2 player action.

My wife had the 2600 as a child and remembers playing games such as Asteroids, Space invaders and Califonia Games. Rather than hunting down the games I was missing, I decided to go my usual route and look for an SD Adapter for the console. A quick eBay search later returned a single 2600 Uno cartridge in the UK waiting for a best offer. The offer was made and for £50 every Atari 2600 game was within reach.

My next step was finding a source to get the games and archive.org delivered. A single zip file with every game, a massive 1.9mb file! 🙂

So now when I power on the Atari I get a nice choice of games to play. Since I was never familiar with the console I looked around for reviews and played some of the most praised games like Pitfall 2 and Seaquest. Games like these are just so fun to pick up and play. I just never seem to have time these days to spend hours if not days working through I giant PC game so I really enjoy playing the old classics.

Due to the age of this console, it was an easy decision on which room it was going to live in. It went in the bedroom alongside the CRT TV. The connection options on the Atari were limited to RF, so an old-style TV was really the only way to go without some serious modifications to the console hardware.