The Atari Jaguar released in the UK in 1994. None of my close friends had one of these so I had never played on one before, and for some reason over the years I hadn’t even emulated one either. So its catalogue of games was pretty much a mystery to me.

My only memory of the Jaguar was seeing it on the UK TV show Bad Influence. But by this time the show was already filled with rumours of the Playstation and the Ultra 64 which really stole the Jaguars thunder.

I have kept a close eye on the price of Jaguars on eBay over the last couple of years and with the recent news of the JagGD SD Cartridge due out for it I figured now would be the time to buy, just in case they start to go up in price. Unfortunately the JagGD isn’t out quite yet and I am pretty impatient, so I managed to find a Skunkboard for sale on eBay.

The Skunkboard can only hold either one or two games (depending on size) and it will only play cartridge games and no Jaguar CD titles. But this will give me something to mess around with until the JagGD releases. To “simplify” things I plan on flashing the games to the Jag from a Raspberry Pi, this way I can link it up to my home automation system and hopefully flash the games to the cartridge via voice command. Once it has arrived I will update this article and see about doing a video of it working 🙂

For the time being, I only have Cybermorph to play on, although I do have Aliens vs Predator and Tempest 2000 on their way from CEX (Anyone else noticed that CEX is cheaper than eBay for retro games most of the time?). I tried playing cybermorph when I first got the console connected, but I had no clue what I was doing, maybe this is one game that reading the manual might actually help. 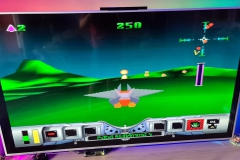 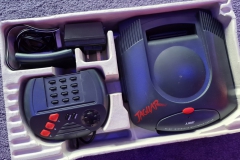 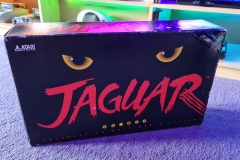 My big problem with the games selection on the Jaguar was that a few of the good ones also came out on other platforms. Take Rayman for instance, this does look great on the Jag, but I had it on the Playstation and have fond memories of the game including its amazing soundtrack. Playing it on the Jag now would just be too different and I don’t think it would trigger the nostalgia as the playstation version does.

The next thing I would like to talk about is that controller!! Everytime I have seen it I was like, what the hell is that! It’s huge and looks like the most uncomfortable thing on the planet to hold. But actually, picking it up for the first time I was really surprised. It’s light, very light! and the back of it is nicely curved and actually fits in you hand really nicely. The little slide-in cards for the keypad are a great idea too, for some reason they reminded me of my old Major Morgan that I had as a kid (remember those?).

Hopefully, over the next few months I will uncover a few hidden gems for the Jaguar, I have high hopes for Aliens vs Predator as I have never played that before. I will update this page in the future with my findings 🙂

Update: I have now received my Skunkboard for the Jaguar 🙂 I started by having a play with integrating it with Alexa but without writing a custom skill it was going to be a nightmare setting up all the voice commands to flash the games. So instead I went for a more technical approach. I have put all the ROMs onto a raspberry pi zero which is fitted with a rotary encoder and a small OLED display.

Now when you power on the Jaguar it goes to a green screen, this is flash mode. You can press up to boot the games stored in bank one on the cartridge and press down for bank two. But also at this point you can flash a new came to the cart. So while the screen is green, I can select what game I want to play on the pi, then select what bank to flash it to. I wrote the menu system in Python and it uses the jcp command-line program to flash the cart.

You can find out more about this here