There is no denying that the GX4000 failed as a console. However, it did have a few pretty good games for it. The main problem is these games tend to fetch a premium on eBay.

There is an SD Card cartridge solution available for the GX4000 called the C4CPC but when I checked the guy didn’t have any left and there would be a wait to get hold of one. The other issue is they cost around £65 which isn’t a bad price, but the GX4000 only had a total of about 25 games released for it and a lot were not very good from what I have read. So an SD solution seems a bit overkill for just this one system.

I decided to opt for a more DIY approach. Thanks to Chinnery on the CPCWiki forum, you can download the Gerber files for a PCB that fits the GX4000. With a few components soldered onto the board and an EPROM chip programmed with the game you want, you can easily construct a GX4000 cartridge.

I ordered the boards from JLCPCB and then purchased the EPROMS and other components from eBay. The total cost was around £45 which gave me enough components to make most of the games.

You then need to get the CPR file for the GX4000 game and convert it to a BIN file using CPRTools.exe.

The resulting file can then be written to the EPROM using an EPROM programmer of your choice. I personally use a TL866II USB programmer which can be purchased from many places including Amazon 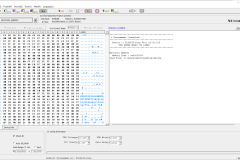 The software I used with this was XGPro which is free to download. You simply select the type on EPROM you are using (In our case the M27C1001 which is 128k). Load the BIN file and then click the program button to flash the chip. Once this is done the chip can then be soldered in place and your game is complete.

There is also a design for a 3D printed case but my first attempt at printing this didn’t go too well as I tried printing it face down, but the indents for the label don’t work like that. I will try again soon printing the other way up and enabling support material. I could also print it with my resin printer but that may be a bit overkill.

One game I have recently discovered is an awesome remake of Ghosts’n Goblins by Xifos and Targhan. The CPR file for this can be found here. But before you rush ahead with this one please note that the size of the game is 256k so you will need a larger EPROM, the M27C2001 will do the job here.